On Ending the Police Occupation and Terrorism Against Black People

The recent murders of Ahmaud Arbery, George Floyd Jr., David McAtee, Tony McDade, Nina Pop, Breonna Taylor, Priscilla Slater, Sean Monterrosa and others are the most recent proof that the police (both state employed officers and white terrorists who deputize themselves to “police” Black people) and the criminal justice system in the United States is not broken but continues to operate as designed.

A few years ago, Mike Brown, Sandra Bland, and Trayvon Martin were some of the names we called.

Before that, Sean Bell, Amadou Diallo, Malice Green and Eleanor Bumpers as well as the countless un-recorded Black victims of state-sponsored terrorism over the last 401 years.

We at Community Movement Builders demand an end to this long list of names.

Unarmed Black people in the US are 3x more likely to be shot by police than white people are.

Over the life course, about 1 in every 1,000 Black men can expect to be killed by police.

Source: Risk of being killed by police use of force in the United States by age, race-ethnicity, and sex

Only about 1% of police officers involved in killings are ever charged with a crime, and even less are convicted.

Our Fights Against Police Violence 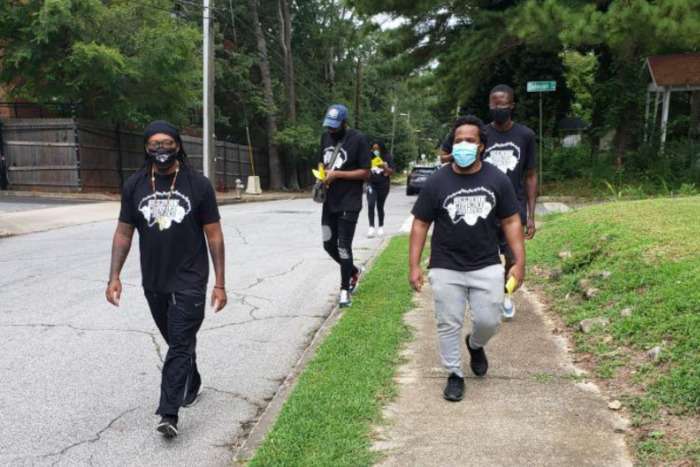 Our security cooperative is training local residents on providing security for the community with safety patrols and cop watches as well as training people in first aid, conflict resolution and investigations. 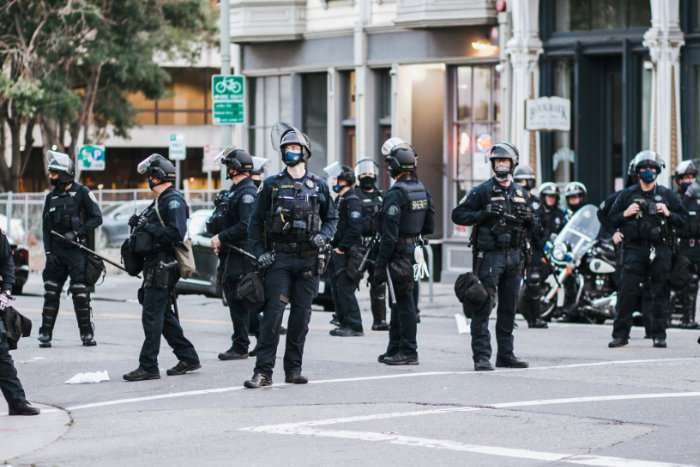 We are part of a larger coalition of organizations fighting to stop the building of “cop city”, a proposed $90 million police-training facility south of Atlanta that will raze 85 acres of forest. This training facility will lead to more militarized policing targeted toward the Black community and movement organizing. 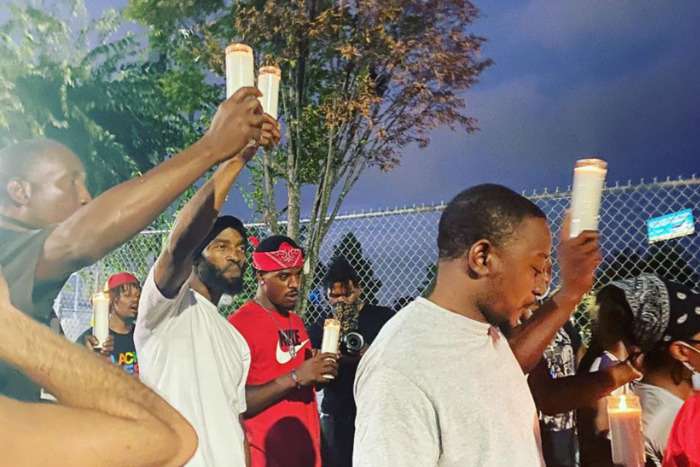 The police don’t “fight crime” nor do they make our communities safer. Their role is to “control” the Black community and to protect private property. We organize to put control of public safety in the hands of the people that does not make our people fodder for the Prison Industrial Complex.

Community Movement Builders agree with the people’s demand not only to de-fund and eventually abolish the police force, but also call for the demilitarization and decentralization of all policing institutions in the United States. As the rebellion raged, state and city governments attempted to pacify protesters by firing so-called “bad apples,” insisting on more training, changing the names of programs and task forces, taking down confederate monuments, appointing commissions to study issues and moving money around. Community Movement Builders maintain that radical change will only take place when Black communities control their own institutions to resolve their own conflicts and keep themselves safe.

Community Movement Builders call for People’s Assemblies (PA) and People’s Community Patrols (PCP) in order to envision and establish a restorative and transformative justice system that views Black people as humans. We understand the ongoing rebellion as the people’s expression of their democratic will. For over 50 years, Black radicals among others have exposed the ways in which the voting/electoral system in the U.S. is manipulated to favor candidates who safeguard racial capitalism and endless war. The PAs and PCPs signal the people’s preparedness to make their own decisions on how to govern and protect their own lives.

To do so, Community Movement Builders propose that the total funding allocated to the Police Department and corresponding programs and task forces be diverted to organize, carry out, and implement the results of the PAs and create PCPs. The PAs would be the first steps towards local communities managing their own municipal budgets. These efforts must be connected to a larger plan for decolonization and redistribution of resources and capital.

In the meantime, Community Movement Builders demand the following reforms:

Only non-lethal arms can be used for purposes of self-defense. Police use of potentially lethal weapons can only be exercised under specific instances that endanger the general public (e.g. mass shootings, hostage situations, etc.).

All military and police troops will immediately withdraw from the streets to allow protestors to occupy public space.

The cash-bail system will immediately end and all current inmates being held for inability to pay money bail will be immediately released from custody.

All current inmates who are aged 60 and older; who require quarantine because of positive coronavirus test result; or who have existing health conditions that make them more susceptible to the coronavirus, including: chronic lung disease, asthma, diabetes, heart condition, liver disease, obesity, pregnancy and other conditions identified by health professionals in ongoing research will be immediately released from custody.

All youth detention centers and residential facilities should be reformed to support a pathway for youth reentry into larger society as soon as possible, with needed resources to provide, housing, clothes, food and access to education. Resources should be reallocated to implement programs focused on social-emotional learning, the hiring of more in-house counselors and therapists to work with our youth on a daily basis while serving their sentences or awaiting trial.

All remaining political prisoners on U.S. territories will be immediately released from custody. This includes but is not limited to organizers from the Black Panther Party, The Republic of New Africa, The Black Liberation Army, The Weather Underground, the American Indian Movement and MOVE. These heros/sheros of our struggle(s) have served enough time in a criminal injustice system meant to destroy movements fighting for basic human rights and self-determination.

All detainees in immigration detention centers will be immediately released from custody.

Police Departments will immediately decertify, fire or suspend without pay any officers involved in the use of deadly force against unarmed civilians pending investigation and ensuing trial.

Police Departments will fire officers who have multiple complaints of excessive force and their partners who silently witnessed such acts and/or who assisted them in falsifying evidence.

Police Departments will fire officers whose actions out of uniform are violent, including social media hate speech, sexual assault, and domestic violence.

All police records will be made available to the public.

Police officers without complaints of excessive force on the job at home will remain until the Departments are phased out and will be subjected to routine psychological and risk assessment evaluations (including racial/ethnic bias) to determine fitness to transition to the new system.

Independent Civilian Review Board(s) with subpoena power will be established. No law enforcement personnel can serve on these Boards. No police departments, appointed police comissioners or elected officials will have the power to overturn disiplinary decisions. Taking into account gentrification, metrics such as zip codes will be used to ensure the eligibility and participation of comunity residents on these Boards.

District Attorney offices in conjunction with the Independent Civilian Review Board(s) will review all civilian fatalities at the hands of the police for the period of 2000-2018. Reviewers will identify cases of excessive and unlawful uses of force for investigation and trial.

An Independent prosecutor will be identified to prosecute all cases of misconduct of police officers.

Police Departments will terminate all contracts with military and mercenary consultants. In particular, any and all contracts with the Israeli Defense Force or any subsidiary that trains police in the U.S. to use the same deadly tactics used against Palestinians fighting for their human rights.

Police Departments will cease to purchase any additional tanks and armored weapons and will immediately dispose of any and all such equipment in their possession.

Police presence will be removed from all public schools.

Recruiters for any armed forces will be permanently removed from all public schools.

Police presence will be removed from all social service/welfare agencies, including public housing.

Minor offenses like turnstile jumping, vending without a permit, a broken tail light, failure to signal, expired tags, and other non-violent offenses that currently warrant booking, impounding a vehicle, or pretrail incarceration will no longer be penalized/criminalized.

Marijuana will be decriminalized and all sentences of those arrested for non-violent drug offenses will be retroactively vacated.

Police Departments shall no longer seize and auction off property of arrestees who have not been convicted of any crime.

The History of Policing

Policing in the Americas has always been about protecting private property, including keeping Afrikan people enslaved on the “master’s” plantations. Originating in slave patrols and night watches in the 17th century, policing of Afrikan-descended people involved surveilling, maiming, raping, and killing to prevent work stoppages, escapes, and revolts.